You wouldn’t trust a skinny chef in an Italian restaurant, nor would you trust a guy to fix your bike who doesn’t ride one. Hank Glowiak, owner and head mechanic at Chuck’s Bikes in Morrisville, doesn’t just ride bikes, he lives on bikes. Glowiak has an intimate knowledge of every bolt, cable, tube, sprocket, spoke and allen-screw on a bike because he has to. Riding as hard as he does, a trailside repair isn’t a question of if, but of how many times in a week. 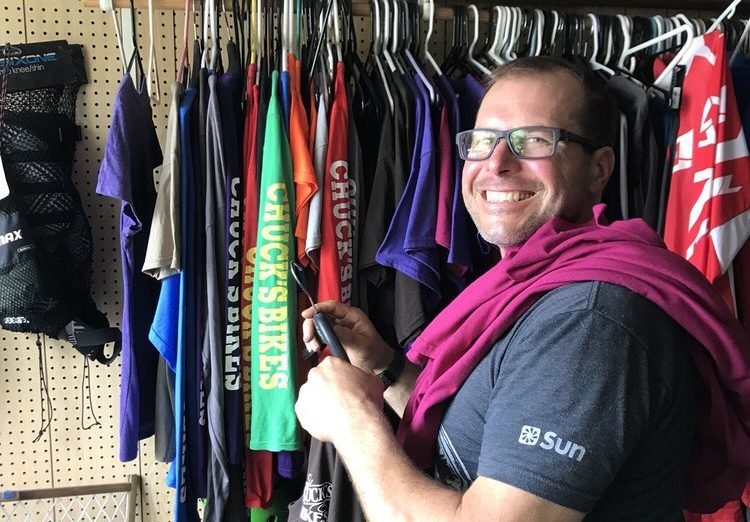 Chuck’s Bikes is a busy place on the weekend, with Hank and his crew fixing up dozens of bikes and answering umpteen questions. But with a gruff voice and daunting frame on a set of biker’s legs that have been said to have calves growing out of calves, Glowiak is known for his “multitasking” style and friendly giant persona. The busiest bike shop owner in the area also builds and maintains some of the highest quality single track you’ll ever have the pleasure of riding.

“Chuck’s Bikes is a grassroots bike shop for the whole family. First timers often look confused when they arrive as the shop is based out of an old house and is packed to the brim with all things bike. Chuck’s Bikes owner Hank is a true community member, often pulling a paying client’s bike off his mechanic stand to make a quick repair to a waiting child’s bike free of charge. I have watched this bike shop evolve into a community staple. Be prepared to wait as things can be a bit chaotic, also be prepared to get great deals on just about everything in house.”